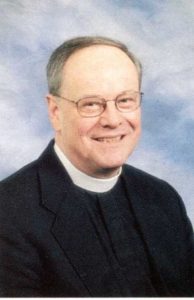 Fr. Sammy Taylor has reported that one of the giants of our fraternity, Howie Calkins, has died. Howie had been an early leader of the fraternity on the East Coast and had served as our National Responsible from 1979 through 1985. For the past few years, his Good Friday and participation in the Paschal Mystery have been experienced through the fog of Alzheimer’s. Praise God his Easter has come and it is time for him to now enjoy new and everlasting life.