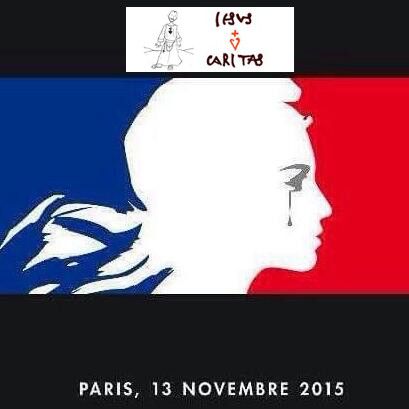 Sorry, this entry is only available in European Spanish and Brazilian Portuguese. 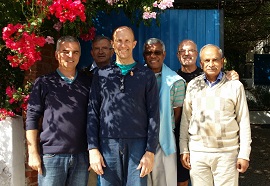 Emmanuel, Jean-François, Félix, Mark, Mauricio and Aurelio have lived our annual meeting in Perín, Cartagena, España, in Aurelio’s house, celebrating his 60th birthday, with our eyes toward you and toward all our brothers of the fraternity while living amidst the people who have welcomed and inspired us. The joy of being together and working together is a gift of the Lord!

WHAT WE HAVE EXPERIENCED

From common prayer in Lauds, adoration and Eucharist, accompanied by the autumn rain, we have felt strengthened by our prayer, by the help of Brother Charles, who intercedes for us, and by the prophetic testimony of Pope Francis in the Synod on the Family, which we have followed very closely. 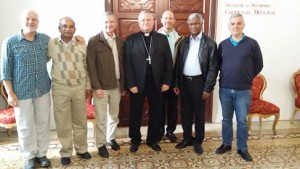 the priestly fraternity, feeling ourselves in ecclesial communion and united in the charism of a man of God, our brother Charles, who calls us in his Centenary, coinciding with the Year of Mercy, called by Pope Francis, to a conversion to dialog, not only between ourselves, but also with our brother diocesan priests, of which we form a part; a dialog and meeting with other religions 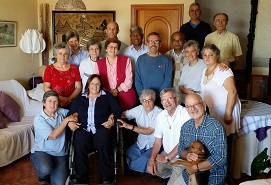 and with non-believers. This makes us think of a “reciprocal conversion” in mutual respect. We want to dialog, not impose. From the July encounter in Viviers has come forth the profound realization of this very important dimension of our charism.

We have met and celebrated with many people of Perín, a friendly people, approachable and cordial, and we have learned from their family experiences and as Christians to be listeners in human and

simple things. Each man or woman is our brother or sister. The two Eucharists celebrated in care centers for the elderly in Périn have impressed us. The elderly, who in our western and European society are the great forgotten ones, the aparcados, “parked away”, have told us that God is child, adolescent, young person, adult and elderly. In this Nazareth of the elderly we have not seen an “expiration date.”

We have seen the projects of the Foundation Tienda Asilo de San Pedro of Cartagena, where Aurelio works, feeling like we have shared in the life of those people who work there, 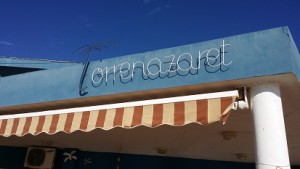 the teams, the volunteers, the benefactors. In the beautiful home “Torre Nazaret”, a project of the foundation, we shared the simple and human Nazareth of being with those with AIDS, with those who by drugs, prison, or the street have been marked as outcasts, but who now are able to live in dignity, recovering some of their health and normalizing their life. It is like a big family that accepts the consequences when life itself is the problem. We felt that they loved us even without knowing us.

WHAT WE ARE BEEN CALLED TO

We are called to many things: 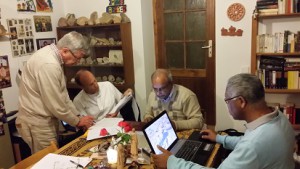 One very important call is to live the Centenary of Brother Charles not like a memorial of the past, but as a celebration of the actuality of his message of universal fraternity. Pope Francis has enumerated various ways to imitate the testimony of Br. Charles; in paragraph 125 of Laudato Si as an example of an evangelizer, and in the vigil for the Synod on the Family as an inspiration for the family model of Nazareth. His constant references to Brother Charles fill us with joy and we feel 100% in communion with the pope. 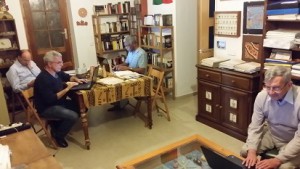 A call to deepen through the mystery of Nazareth: an attitude which unites contemplation, proximity to the poor and an experience of our fragility as the place we welcome the power of the resurrection. We need to live universal Fraternity in a real and concrete way, without being theoretical about life or about people.

A call to give priority to the Day in the Desert: we experience that the monthly desert is difficult for priests, overloaded as we are with work. Absorbed by pastoral activity, and the logic of being liturgical functionaries, we leave to another occasion the Desert, and this can become a bad habit. We always think about doing, doing, doing, but seldom in listening and we lose sight of the Lord’s search for us.

We feel the call to be at or go to the “periferies,” both geographical and existential, those of people with problems, without eluding our priestly vocation as priests who are called to announce the Good News, not as pastoral experiments or as spiritual tourism, but to be with the least. From Nazareth the Lord Jesus invites us to be his neighbor, with his health problem, or his loneliness or his poverty. He lived in a poor, oppressed and forgotten place. If we are not with the poor we do not know what Jesus wants to say to us! We give a new reading of Laudato Si and Misericordiae Vultus (15).

We hear a call to conversion, to renew our concept of Mercy as being witnesses to the love of God. We remember Christ’s words which Br. Charles liked so much: “My grace is sufficient for you, for power is made perfect in weakness,” (2Cor 12.9).

WHAT WE HAVE PREPARED OR STUDIED

We have worked on the upcoming Pan-American Assembly to be held 15-20 February 2016 in Cuernavaca, Mexico. The regions of Québec –Acadie, United States, Mexico, Dominican Republic, Brazil, Argentina, and Chile, along with a representative of the fraternity which is being formed in Haiti and a brother from Guatemala, are going to meet for the first time outside of the International Assembly. We value very much the work and coordination of Fernando TAPIA, responsible for Chile, who has already gathered almost all of the questionnaires previously prepared by the regions; we thank our Mexican brothers for the welcome that they will give us. Because of government control we are not able to be in contact with the seven brothers in Cuba who along with the Little Brothers of Jesus form a fraternity. 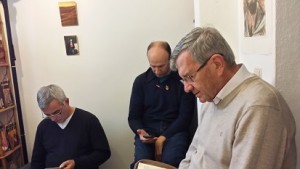 The next Asian Assembly will be in the Philippines in July of 2016. Arthur, responsible for Asia, is working on it with the brothers there. The Month in Asia this past July in Myanmar has made contact possible between many brothers and strengthened the bonds of fraternity among them. There are fraternities like Malaysia, Indonesia, and Australia of which we have little news. We have asked Arthur as Responsible that he would contact these brothers.

We dedicated a lot of time to the next International Assembly, from the 15th to 30th of January 2019 in Bangalore, India. We have three years to define objectives, methodology and contents. 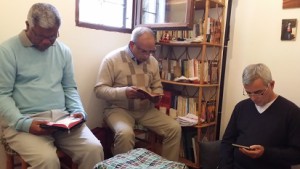 A big preoccupation of these days is the health of some of our beloved brothers including Michel PINCHON, Giuseppe COLAVERO, Tony PHILPOT and Howard CALKINS… We are concerned for them and we feel in communion with them in these difficult times. May they not lack our prayer and our love.

Mark has made a summary of the finances of the International Fraternity that he will send to all the Regional Responsibles. We think that it is necessary that all regions contribute 10% of their dues income; this includes those countries with little income. Also some regions in the West could review their criteria for sharing because the needs are so great. “One poor person gives a little, another poor person gives a little… at the end it is much more than the rich person gives.”

The recognition of the statutes of our Priest Fraternity with pontifical approval by the Congregation for the Clergy is good news for the Priestly Fraternity.

We want to remind everyone to use quick and easy means of communication; our website www.iesuscaritas.org is at the service of all the fraternities. 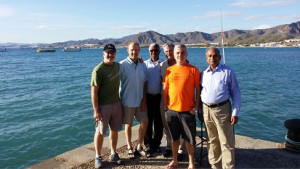 As an international team, as a fraternity of 6 brothers from 4 continents, THANKS to all; thanks for the prayer, for the financial sharing that comes from various countries and brothers, thanks for making a place in your heart and in your house for this work of extending the Kingdom, the Good News, the joy of being Christians and looking upon one another and upon us with the eyes of Jesus.

In Perín, Spain, we have spent each day thinking of you and the realities of your countries, realities that are sometimes hard and difficult; as you are valuing persons, not their capacities, looking into their eyes and not at their sunglasses, valuing their hearts, not their intelligence.

May God, Mary and Brother Charles bless you.

A great hug from your brothers, 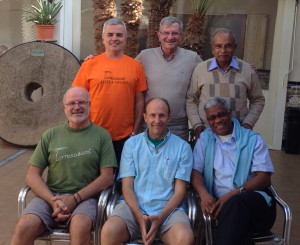