THE RUPTURES OF FRATERNITY

WHAT DOES A PRIESTLY FRATERNITY SEEK?

A Writing about fraternities probably from 1980,
An original contribution by a brother of the Spanish Fraternity

A SUMMARY of our exchanges

Charles de Foucauld wrote in Beni-Abbès in 1902: “I want to accustom all inhabitants: Christians, Muslims, Jews and pagans to look upon me as their “Universal Brother”.

This seemed to us to be an essential element of his message. How do we live it? Here are some important elements that can be drawn from our exchanges:

1) You cannot speak of universality without being rooted in a very specific milieu as was Jesus of Nazareth.
A deep encounter in friendship with a specific person puts us in communion with a whole milieu or a whole people By making ours the many sufferings of the poor, we join what is universal in the heart of man. Thus, it will be easy to encounter, in all situations, the universal man.

2) In our specific groups – fraternities, etc. we learn of universality in the operation of a diversity of temperaments, of ways of living, of situations, of options, etc. One does not choose one’s brothers, one’s sisters, Similarly, in a family, parents must accept the diversity of their children. Knowing how to listen, seems absolutely essential in order to accept the other in his or her uniqueness.

3) For this acceptance to be authentic, it must be deepened in truthfulness and in clarity, so that each one is recognized and accepted in what he or she is, in their own destiny or commitment, however extreme it may seem to us. An in depth “Review of Life” is necessary in order to orient oneself in the face of the common vocation of our group.

4) Desiring to live Universality is often done in suffering, because it entails misunderstandings and ruptures, the meeting of obstacles and tensions, and seeing impossible situations. How can someone love the rich when he suffers with the poor? How in a specific case do you reach forgiveness? Just as when one feels one’s impotence in the face of the world’s enormous problems.

All this compels us to live Universality with hope, propelled in prayer. When everything is beyond us, it is the time to ask God that He accompany my brother.

5) Universality is not natural. It only comes to us through Christ; it is in Him that we find the unity of all people. In prayer barriers are abolished. The Eucharistic prayer and the offering of suffering, in union with the redemptive mystery, have an efficacy of universal scope.

6) A universal action is impossible. Yet our heart must become universal: all men are our neighbour, our responsibility is committed to each one.
To be universal is not only respect for the other, the poor, the non-Christian, more especially our Muslim brother, but it is the humility that allows us to learn from the other, to be transformed and evangelized by him.

We are tempted by self-sufficiency, which prevents us from renewing our human relationships, and from feeling that one has an incessant need for others.

We will have the illusion of believing ourselves to be universal because we have a vast information: intellectual culture is not enough, humility and realism are necessary.

The Responsibles of the Fraternities

(Translation of Liam O’CUIV. Thanks so much) 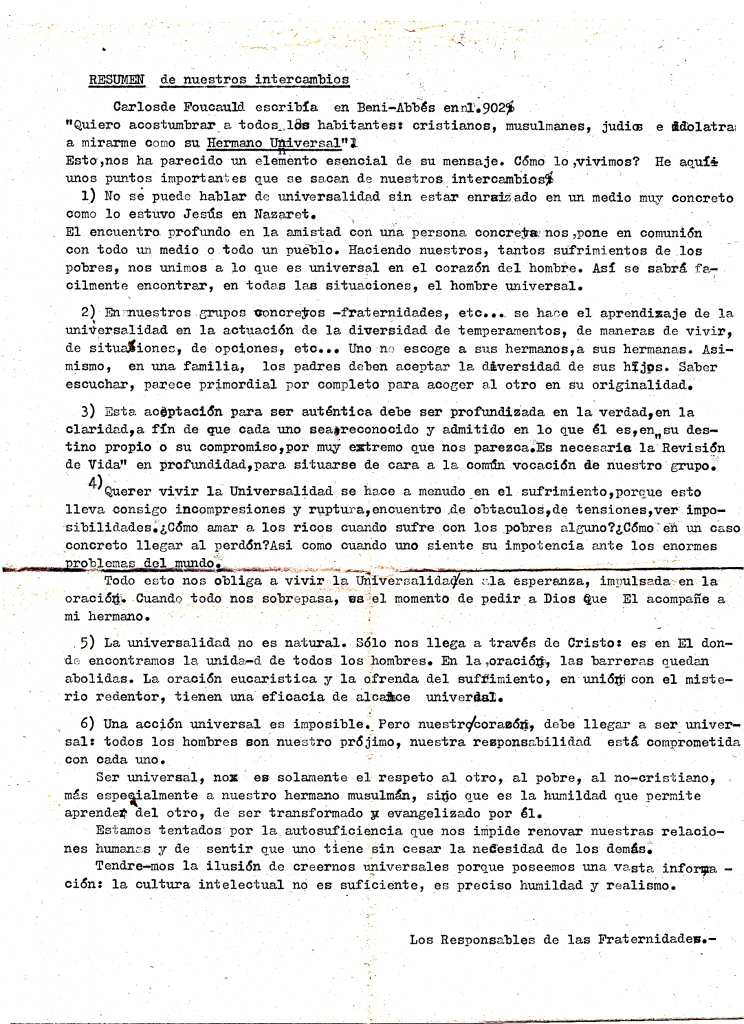 PDF: A wrating about the fraternities. 1980 en

The situation in Myanmar has completely escalated since February. The army deposed the government of Aung San Suu Kyi and arrested her for numerous alleged offences. Since then, a civil war has been raging, with fighting taking place in quick succession. After an attack on a church, Pope Francis called for religious sites to be banned, a call that so far has fallen on deaf ears. Myanmars specialist Walter Mensaert sheds his light on the conflict.

Walter Mensaert is an experienced travel agent who has specialised in Myanmar – the former Burma – for more than a quarter of a century. As a travel agent, he has good contacts in the Asian country and its neighbouring countries. Through local correspondents and news sites, he follows the situation in Myanmar closely. “More than 25 years ago, we focused on a few Asian countries. After a few visits to Thailand, Burma caught our eye. The purity of Myanmar contrasted sharply with the commerciality of the neighbouring countries. This authenticity is typical for the country. But it is also very unstable, it has been in civil war for over 70 years: the longest running in the world. Since my first visit in 1995, Myanmar has had good periods, but also many dark periods, and the darkest is now upon us”, Mensaert believes.

“Myanmar has seven states where ethnic minorities are dominant and seven more central regions where the Bamars, the original inhabitants, make up the majority of the population. Many rules and laws discriminate against non-original Burmese. For example, people from these minorities cannot climb to high positions in the army or to important civil service positions: these are reserved for authentic Burmese. The government of Aung San Suu Kyi has tried to change this and has put more emphasis on equality. This led to a large protest from the army”.

The army is now in power after a military coup. Why are government and army diametrically opposed?

“You cannot compare the army in Myanmar with what we know in Belgium as Defence. Here the army is paid by the government, in Myanmar the army generates more income than the government. They get their income from the export of raw materials: gems, jade, gas and oil. That money gives the army great power and causes a power struggle between army and state. Many soldiers are conservative, nationalistic Burmese, who oppose foreign population groups. There is also a conservative movement of monks, who only want Buddhism in Myanmar. Both movements have tolerated other population groups and religions for years, but that seems to have come to an end.”

There have already been several attacks on Christian targets in Myanmar. Is there any persecution of Christians?

“The Catholics are found mainly in Kayah, Chin and Kayin state. In Kayah State – the region where the longnecks live – there is heavy fighting now. This is not persecution of Christians. It is a power struggle between the army and the minorities, an attempt to push through their nationalist agenda. The violence is not aimed specifically at Christians; the Rohingya, the Muslim minority, are also suffering. One of the important factors is the arrival of hundreds of thousands of Rohingya from Bangladesh. They are no longer a minority in Rakhine State, which has caused unrest among the population and the authorities.”

The war in Myanmar is still raging, but reports are only trickling in sparsely. How do you explain that?

“Reporting is a big problem. Because the country has been in turmoil for decades, the books that are published are historically incorrect. This makes it very difficult for the outside world to understand the problems in Myanmar. A lot of fake news appears, which makes the situation even more difficult. I follow Al Jazeera, BBC and some international news agencies closely, but reports are scarce. Just at this moment, eye-catching advertisements are circulating for Burmese YouTube viewers. One of my correspondents – someone I have worked closely with for 26 years – sent a commercial: ‘My friend, I know you are full of trapped feelings and words that you would like to express, but don’t know who to talk to. You can talk to me. I am your friend, Jesus’. The impact of such messages on the spread of Catholicism, especially among frightened
and searching young people, cannot therefore be underestimated.”

The conflict has been dragging on for decades. Why did the fire go out on 1 February?

“Covid-19 was the trigger, I think. There were no more tourists in the country, the economy was hit hard and the army seized that momentum to close all airports and carry out the coup. The accusations against Aung San Suu Kyi are ridiculous: among other things, she was arrested for not wearing a mouth mask. February is normally the tourist high season, now – in the absence of tourists and international attention – it was marred by the events of February 1.”

What is the situation in the country now?

“The coronavirus is currently raging very fiercely in Myanmar. Millions of residents are out of work due to an economy in free fall. Hundreds of thousands fled the violence into the forests. The military is playing a dirty game (sigh). They work with informants and have appointed a government official in each district. In this way, they exert pressure on and control over the population, which rebels against these measures. Peaceful protests are brutally suppressed. There are regular reports from Catholic quarters: a sister kneeling before a soldier on the road and begging for peace, an attack on a church, the arrest of priests who were calling for peaceful protest. Even Pope Francis called on the regime to keep religious places free from violence: a call that fell on deaf ears.”

Myanmar is always on the border between war and peace. Is there a brightening in the near future?

“It is a very delicate situation. With an oil pipeline and silk route running through Myanmar, there are international interests at stake in the country’s political development. The surrounding superpowers are interfering in the conflict in a negative way, mainly through trade interests. Some supply weapons, others have a pipeline running through the country. The population is now turning against China: there have already been several attacks on Chinese factories. The representatives of the United Nations have tried to engage in dialogue, but without result. As long as the interested superpowers keep their umbrella over the military junta, the situation seems hopeless.” III 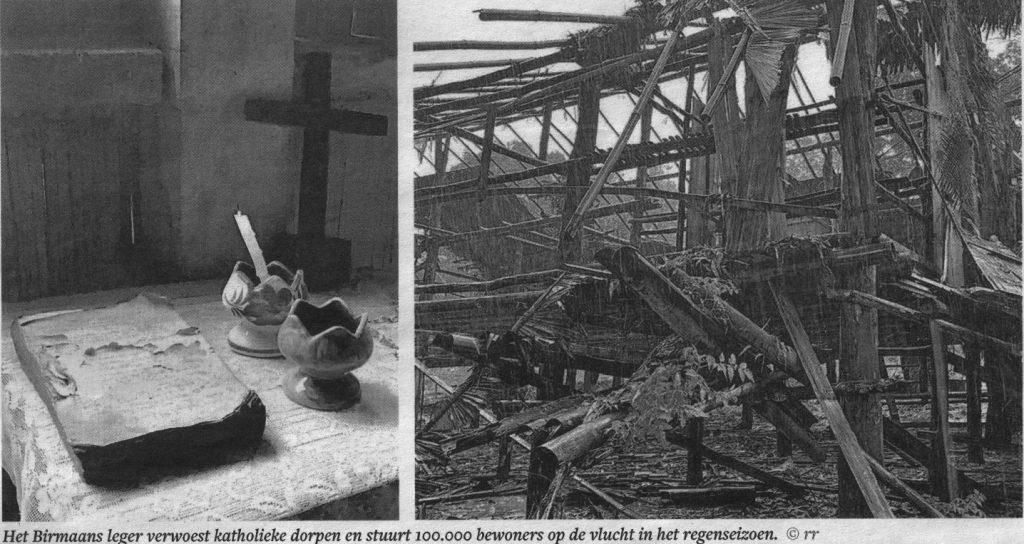 The Burmese army destroys Catholic villages and causes 100,000 people to flee during the rainy season.