In order to prepare for the Centenary of the Pasch of Blessed Brother Charles de Foucauld and the next Continental Assembly of the lay fraternities of Africa, in regard to which Madagascar figures as one of the proposed countries to host it, the six members of the of the national team from six groups of the Spiritual Family in Madagascar (three laity: two men and one woman, a religious sister and two priests) met in an extraordinary meeting over three days, the 25, 26 and 27 February 2015.

At the end of the meeting, the laity were charged with transmitting the results of our exchanges and reflections at their next assembly as rapidly as possible to the continental Responsible, in the form of proposals,. I, for my part, would simply like to share our projects for the celebration of the centenary of the death of Brother Charles. We hope that these projects do not deviate from the line advocated by the message of the International Team of the Priestly Fraternity: ‘Everything, by sharing with the most humble, must be a celebration in the style of Nazareth, far from any expression of triumph or grandeur’ (Courrier des Fraternités, Edition nationale, N° 221 – Janvier 2015, p. 4).

The actual celebration will practically cover the whole 2016 centennial year and will include for us two specific, complementary and inseparable, objectives: firstly, to reinvigorate existing fraternities, because they are fledgling fraternities, still fragile fraternities, searching for ways for their testimony of life; and secondly, to create awareness of Brother Charles de Foucauld now beatified, as well as of his message, his charism, to show his relevance in full daylight. It will begin on Sunday 15 November 2015, the anniversary of his beatification, and will close on Sunday 4 December 2016. For the opening celebration, each base fraternity is encouraged to arrange, with the agreement of the parish priests, a celebration of the Eucharist that they will endeavour to prepare, in the spirit and spirituality of Nazareth, as well as possible. For the closing celebration, we will organise for the priests a week’s retreat from Saturday 26 November until Sunday 4 December 2016, in the spirit of Nazareth. We propose holding in this final week the continental meeting of the African Lay fraternities in our country, so as to lend a more universal dimension to the closing Mass of Sunday 4 December. It will be celebrated in one of the capital’s parishes and it will see the presence of all the fraternities of Madagascar that can come. It will be followed by a fraternal agape which we will have the joy of sharing with the delegates of the fraternities of the other countries of our continent.

During the year 2016, we foresee having some activities from the perspective of the two objectives that we have set ourselves. For the existing fraternities, we aim to send them four sets of questions for them to address each quarter, not only to keep them awake during the centenary year, but also to help them to launch very simple local activities, activities specific to their level, without ever losing sight of their link to other fraternities. On a national level, we aim to organise a radio broadcast per month on Radio Don Bosco (RDB) which covers the whole of the country by relay with the numerous diocesan radio stations. Through these programmes we aim to raise awareness of Brother Charles’ life and the relevance of his message. We plan to record these programmes during the month of July 2015, in order to have sufficient time to copy them and distribute them by CD to the different base fraternities. Songs composed by major seminarians of ours on Brother Charles will be broadcast at the same time as the programmes and provide quality musical support, with a singing of the prayer of abandonment already widely known in our fraternities.

Our desire to make Brother Charles known does not stop there. A play about his life and the relevance of his message is at present being drafted by one of us and will be staged during the centenary year: indeed, performances constitute for the simple people amongst us, a privileged means of transmitting a message. Along the same lines, reports will be given of today’s Malagasy fraternities, in order to show, by means of their regular meetings and different commitments, how the message of Brother Charles is beginning to be gradually received on the great island.

As the majority of the Malagasy people, especially the most humble, listen, watch and admire much more readily what they read, we have decided to prioritise the audio-visual aspect of communication. However, we also are publishing some articles in newspapers or in specialist magazines, to make Brother Charles and his spirituality in intellectual circles or in certain particular strata of the Malagasy population better known.

We entrust all these projects and all these activities to one another’s prayers, so that with the grace of God and the support of Brother Charles himself, they may bear abundant fruit for the fraternities and the whole Church in Madagascar!

Have a good road to Easter!

from the 21st to the 27th of March we met in Perín, at Aurelio’s home, to reflect and work on the life of the fraternities. By means of this letter we wish to be united with you, our brothers spread throughout the world, in Africa, in North and South America, Central America and the Caribbean in Asia, Australasia and Europe. 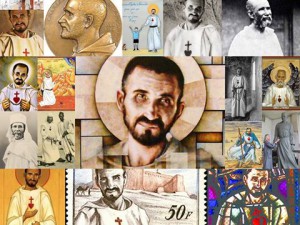 We believe that an important fact in the life of the Christian communities, that we accompany as priests today, is the teaching of Pope Francis, and the perspectives for the renewal of the life of the Church which he has set out in his apostolic exhortation Evangelii Gaudium

We are delighted with the convergence between the main themes developed by Pope Francis and some fundamental aspects of the spiritual message of Brother Charles:

Thanks to all our brothers who highlight this convergence in their writings and utterances on the occasion of meetings and retreats. This helps us progress and reiterates the validity our priestly fraternity has at the heart of the life and mission of the Church.

During our week joined in friendship and sharing together in prayer, we addressed various themes which are related, in one way or another, to the “universal brotherhood” desired by Brother Charles:

1) The recognition of the Priestly Fraternity Iesus Caritas by the Congregation for Clergy. This is not just some formal procedure in order to ‘comply’ with them. It is a case, above all, of investing our priestly ministry with the special character that marks the spirituality of brother Charles (the spirituality of Nazareth, the missionary dimension characterised by an apostleship of goodness, the preferential option for the poor, and our willingness to share responsibility with laity…) within the dynamic of the universal Church. 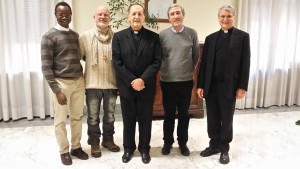 Following a short meeting Aurelio, accompanied by Secondo Martin (Italy) and Honoré (Burkina Faso), had with Cardinal STELLA, the new Prefect of the Congregatio pro Clericis, in Rome, last December we proceeded to send on all the documentation requested with our request. We await recognition.

2) We also worked on the project for the intercontinental meeting of the Americas (North, Central and South with the Caribbean) in Mexico in February 2016.

Our thanks to the fraternities of Mexico who will host this important meeting and provide food and accommodation.

Thanks also to Mauricio da SILVA JARDIM from Porto Alegre and to Mark MERTES from Kansas City for their active involvement in the preparation.

3) In the context of a situation marked by the tensions between part of the Muslim world and the West, we see the importance of the Viviers meeting next June 13 – 19, on the theme “Diocesan Priests, at the service of the meeting of Christians and Muslims in the light of the message of Charles de FOUCAULD”.

This meeting will help us have a better understanding of priestly ministry in its responsibility to promote and develop within Christian communities a movement of encounter and dialogue with Muslims.

Priests of the European fraternities will meet with priests who minister in the Maghreb or in the Sahel. This exchange of experiences could be valuable in helping us to adapt to one another in our concern to serve “universal brotherhood”.

(See the invitation to the meeting on the international Fraternity website: www.iesuscaritas.org)

In order to organise the Month of Nazareth or meetings, and the travel involved, the international fund needs regular support.

For this reason we believe that each country should dedicate 10% of its subscription to the international fund.

Mark MERTES, the economic responsible of the International Team, will be in contact with each national treasurer to achieve this aim.

5) Thanks to all who replied to the questionnaire proposed on the occasion of the Meeting of the Spiritual Family of Charles de FOUCAULD which will take place in Castelfranco, Italy, in Easter Week. Aurelio will take part and will fill us in on all the preparations for the celebration of the centenary of the death of Blessed Charles de FOUCAULD. 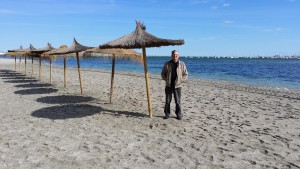 It will be a time for us to listen together to all that is happening in fraternities around the world.

It will also be an opportunity for the team to discern what the Lord is asking of us so that, together, in fraternities spread across the whole world, we may all serve the unity of the human family, as called for by the Second Vatican Council and present Brother Charles as “Universal Brother”.

We do not forget that in these meetings of the International Team it is the spirit of Nazareth which guides us and calls us to live it out in our meeting the people and the Christian communities that welcome us.

In this spirit, during the course of our week, we met the Bishop of Cartagena, José Manuel LORCA, Little Sisters of Jesus, brother priests of the Murcia fraternity, as well as all those living in the Torre Nazaret community, those who host them and neighbours of the parish. 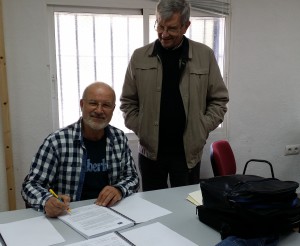 We wish you well on your journey towards Easter and offer a heartfelt embrace.

More than ever this theme takes on a great relevance in a social and political context marked by fears and withdrawal in regard to defensive identity.

This meeting is open to all diocesan priests who wish to promote and develop the encounter between Christians and Muslims in the context of their ordinary pastoral ministry. There are still 20 places available.

It will bring together priests from different European countries and priests exercising their Ministry in different countries of the Maghreb and sub-Saharan Africa.

The talks will take place in the following manner :

On Tuesday morning: “The Situation of Islam in Europe” by Fr. Christophe ROUCOU Director of SRI (National Secretariat for Relations with Islam)

Friday morning: ”Testimonies of priests in the Maghreb and in the Sahel” Fr. Bernard Janicot for Algeria, Fr. Esaü Odjiram from Chad, and Fr. Denis Koyedama from The Central African Republic (members of the Fraternity)

Afternoons will be devoted to sharing different experiences of encounter and dialogue between Muslims and Christians in the different countries represented.

Those who wish to inscribe for and partake in this meeting must do so as soon as possible using the form, on the iesuscaritas.org web-site or that in the Courrier des Fraternités n.º 221, Janvier 2015