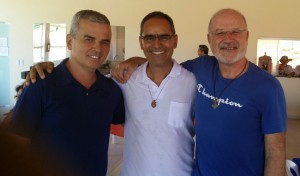 what a great joy it is to be with you and to take part in the retreat in Casa Bethânia of San Juan Bautista, Santa Caterina (SC). Thanks to all, and especially to Gildo and the preparatory team. Thanks to Mauricio, my brother on the International Team. For the silent work of Almir, Edimar, Nicanor and other brothers, who received us and looked after us with simplicity both in the Florianópolis seminary and in Casa Bethânia: looking after all the little details with their help and availability, many thanks. 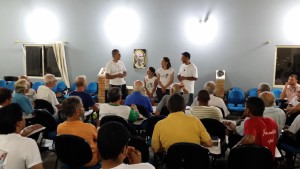 As a European, our Bishops Edson and Eugênio have impressed me, with their fraternity style, truly “smelling of the sheep” and of the street. Eugênio has done us a great favour with his meditations, which have helped us to deepen our living the spirituality of Charles de FOUCAULD, and the shared celebrations of the Eucharist with people from Casa Bethânia, a family without blood ties, but united in faith in Jesus Saviour, and with the resonance of the message of welcome and love of their founder, Father Léo: it is a true miracle to restore to people their dignity and heart.

I believe that the diversity of participants is very good, not just priests of the Fraternity, but also the participation of lay members and supporters of the Fraternity and of the two deacons… This has lent a fine ecclesial and fraternal style to the twelve fraternities taking part in the retreat sharing in the Review of Life and the experiences of the Day in the Desert. Personally it has really helped me to get to know your Fraternity open to human realities, and not just centred on itself. 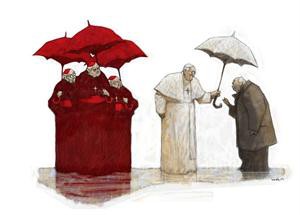 Pope Francis has been another participant in our retreat. It is as if he has travelled along the path with us. We have appreciated his message, full of the Gospel, his prophecy and his love of the poor: a Church where we feel at home once more, and called to announce Jesus with the joy of the first Christians, in a complex world full of false gods, sometimes in the guise of institutions, individuals, systems, claims… attractions of power, of wealth, of pleasures. Francis has been a breath of fresh air for us and has spurred us on to give of what we have within us, as earthen vessels. His being in tune with the inspirations of brother Charles delights us, with his universal message which brings so much to the Church and also to the lives of the most abandoned.

I felt the joy in the celebrations, with the singing and raised hands, and the silence in the adoration. Thanks for allowing me share life celebrating what we are as wood from the same tree, with branches that afford shade, welcome birds, shelter from the rain, the tree of the cross which is the tree of life. 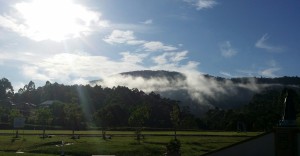 Eugênio encouraged us to arrange a monthly Day in the Desert in our diaries, as a priority, giving time to the Lord, in order to listen to him, not to burden him with our petitions and prayers, stripped of everything, being just as we are, without pretense… without books, pen or paper… a gift from God. It might seem a waste of time, and, nevertheless, it is time the Lord has for us, gratuitously, in his hands, as we say in the Prayer of Abandonment. 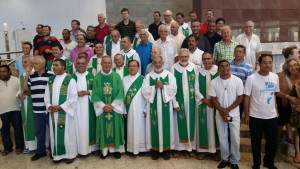 In February 2016, the centenary of Brother Charles, we will hold the first assembly of the Fraternity in the Americas in Mexico. There are eight countries in which the Priestly Fraternity is present… with North, central and South Americans: it is a challenge for our universality as Christians and as brothers; a call to us not to engage in naval gazing but to share the reality of a Church with different characteristics, yet one in the heart of Jesus.

I invite you to make frequent us of our Internet page www.iesuscaritas.org and to share what is happening, communications and forthcoming events of the Brazilian fraternities. We have this means to get to know each other better and to bring us close to our brothers across the whole world.

Thanks for being brothers, for living brotherhood in your lives, and not just in theory. You have done me a power of good!

I bring a sincere embrace from you all to Spain, and from here send you another big and firm embrace.

United in prayer and in the dream of brother Charles, your little brother