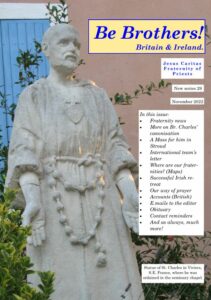 Brothers together. From the Irish Responsable.

We were blessed as an Irish Fraternity by having over fifty of our Brothers come together for four wonderful days of communion and love in the west of Ireland last September, to mark this special year of joy and bask in the gentle afterglow of grace following the canonisation of Brother Charles.

We had a tranquil and contemplative time together and enjoyed having Bob Rainbow from Britain walk amongst us and give us new insight and encouragement. Jim Murphy led us on the themes of FRATERNITY / CONTEMPLATION / REVIEW OF LIFE and all the brothers contributed in a myriad of different ways to ensure we journeyed in unity of vision and focus. The presence of our Little Sisters was a core benediction and a constant reminder of the depth of simplicity and attentiveness to which we are all called.

We were and remain so thankful. As one brother remarked so beautifully afterwards: “In being thankful for the retreat, I am reminded of little Bernadette Sourbirous’s advice to a young novice who was attending to an elderly sister – ‘ Do not lead your sister to the point where she may express thankfulness for your care, because to be present in love to one another is thankfulness itself ‘. Such was our experience together. Thanks be to God.” So keep our next national retreat date in your diary! It is Sunday, September 24 – Thursday 28 2023.

We held a special commemorative Mass for our deceased brothers and continue to remember them during this month sacred to the memory of those who have gone before us. Requiescant in Pace. And as we approach Advent may each brother experience a new and deepening faith in the mystery of the Incarnation.

On Friday the 16th, the brothers from Canada arrived, thus initiating our Third Pan American Assembly. Others arrived on the 18th and others on the 19th. Marco Bustos, our great host, was in charge of picking up some at the airport and surrounding himself with other brothers of the fraternity of Cordoba to pick up others and they gave us all a warm welcome.

The delegates from the Dominican Republic, Chile and Mexico had the opportunity to be received at the home of the family of Fr. Marco Bustos, who were celebrating the birthday of Don Raúl, father of Fr. We were welcomed with a barbecue and an artistic show by Don Raúl and Mrs. Aidé, parents of Father Marcos.

Those of us who had arrived on Sunday went to the house of the sisters. Handmaids of the Heart of Jesus, where we rest a little after a long journey. Then we were taken for dinner some delicious pizzas. Some of the brothers lost their suitcase at the airport, including their computer. The countries participating in the Assembly were: Quebec-Acadie, Chile, United States, Dominican Republic, Brazil, Mexico and Argentina. We were visited sporadically by a priest from Venezuela, a missionary in Córdoba.

On Monday we were almost all in the house, however, the brothers from Brazil and Fr. Alex from the United States, arrived on Monday night, which made us formally begin on Tuesday morning with adoration and lauds, presided over by the delegates of the Dominican Republic and Mexico.

On Tuesday we dedicated ourselves to reviewing the reality of our fraternities based on a Report presented by the Continental Responsible. The goal was to discover the strengths and weaknesses of our fraternities in America. We worked in groups by language and write a summary to share the results of our work

The main weaknesses that appeared are: the aging of the majority of the members of the fraternity, the overload of work of the brothers and the distances that hinder the growth of our fraternities. Among the strengths are: the spirituality of Bro. Charles: adoration, the Eucharist, the desert, the option for the poor and universal brotherhood; the presence of bishops in the fraternity, the presence of our brothers and sisters in the peripheries. We did a new group work with the following question: What proposals can we make to enhance our strengths and overcome our weaknesses? Finally, we had a new plenary to share the proposals.

In the last session on Tuesday we began the presentation of the missionary experiences of the different countries. Brazil, Canada and the Dominican Republic started. The case of Brazil about a shelter for priests in crisis, organized by fraternity, seeking to respond to a need, since there were about 12 priests who committed suicide in 1 year, is striking.

Canada presented a case of migration and the response that fraternities gave to those cases. The Dominican Republic presented the missionary experience of Msgr. Lorenzo Vargas, a member of our fraternity, in an impoverished area of the Dominican Republic, accompanying the poor and fighting for ecology, especially in favor of the rivers, since the mining company Barrik Gold wanted to build a tail dam, which was going to pollute the community. The day culminated with the Eucharist presided over by Fr. Abraham Apolinario of the Dominican Republic and a delicious dinner.

On Wednesday the 21st, after the lauds and adoration presided over by the brothers of Brazil, we had breakfast and then continued with the presentation of missionary experiences.Fr. John from the United States began and presented his experience in the Diocese of Pennsylvania, which, despite its luxury, thinks about the poor who are in need.Fr. Alex presents the reality of the parish where he was in which the priest joined the people to evangelize, where 95% of the people were Catholics and Hispanics.

The second country to present its experience was Mexico. José Rentería told us about the pastoral care of the disabled, including the deaf, mute and with special conditions, excluded because of their condition, in his San Bartolomé Parish in Guanajuato, Mexico. A pastoral ministry of accompaniment to the poor and excluded in the spirit of Br. Charles.

We continue with Chile. Juan Antonio González presented us with a pastoral experience of inculturation in the Mapuche world, in the south of Chile, diocese of Temuco, where there is a conflict of the Chilean State with the Macuche people. He presented the Gospel to us in dialogue with the Macuche culture. To achieve greater inculturation, he went to live among the Mapuche people. He worked in agriculture, an orchard, vegetables and a chicken company. He lived there for 8 years.

We culminated the missionary experiences with Argentina and the work of the brothers with people with addictions through an institution called Familia Grande Hogar de Cristo. They have 250 centers throughout the country. They show that God wants us to bear fruit, albeit imperfect. It focuses on receiving life as it comes. It was inspired by Jorge Bergoglio 15 years ago. They receive women and men with different life situations.

They also present the pastoral Guadalupe with Father Pepe, working with the sexually excluded: trans, gays, lesbians, prostitutes, and street people, etc. In addition, open hands, where they work with children with judicial problems and with migrants. Guadalupe pastoral is new and was recently presented as the official pastoral ministry of the diocese. They have shelters for these people.

After listening to missionary experiences, we received a doctrinal illumination with the theme “Mission in Fratelli Tutti”, made by our brother Willians from Brazil.

In the afternoon we worked as a group around two questions: what conclusions do I draw from the presentation of missionary experiences and the illumination received, in relation to our mission as diocesan missionary priests? And what missionary proposals can we make to our fraternities?

It was proposed that in our National Assemblies we replicate this methodology by presenting various missionary experiences that occur in our countries, to awaken or promote the missionary spirit of the brothers. It was also suggested that in our retreats we work on the spiritual attitudes necessary to increase the missionary spirit and thus overcome what the Pope calls “spiritual worldliness” that translates into easy living, the search for money, sex, etc.

It also proposes to use the means of fraternity to respond to the needs of the poor and excluded. The Spanish group said it challenges the monocultural formation of some training houses. It proposes to avoid the spirit of closure and clericalism, indifference to the sufferings of Nature and patriarchal attitudes.

Later we left in groups to visit some parishes of Córdoba. We celebrated the Eucharist and had dinner with the parish priests and their communities, who received us with great affection. We also enjoyed a tour of the territorial areas of the parishes where we were. An exceptional experience.

On Thursday the 22nd we started our day at the usual time, 7:30 am, with adoration and lauds. After breakfast, we gathered to listen to a video-greeting from the International Head of our Fraternity, Fr. Erick Lozada; We also listened to the recorded greeting of Msgr. Ángel Rossi, Archbishop of Córdoba, as well as the message of Msgr. Rafael Felipe, Bishop Emeritus of the Dominican Republic, founder of the Fraternity of the DR. We also highlight the presence of Msgr. Ricardo Seirutti, auxiliary bishop of Córdoba. Then we received some orientations digitally and started our day in the wilderness. Some did it in the House where we were and others went for a walk to the mountain or around the House The Desert lasted until 3:30 pm, when we met for language groups to make a review of life and tell the experience of the desert day.

After completing this moment and a comforting break, we gathered in the conference room to listen to the 6-year Management Report (2016-2022), presented by Fr. Fernando Tapia, of the Fraternity of Chile. Then we proceeded to the election of the new continental responsible of America, being elected Fr. Carlos Roberto, of the Fraternity of Brazil with a vote of 10 out of 15, in the first round, exactly the 2/3 parts that are regulatory to be elected.

After mass and a delicious dinner, we had a cultural night, in which we shared with Cristina and Quique, a singing couple from La Rioja. One of our participants, Alex, from the Fraternity USA, had to leave on Thursday night, as he had an error in issuing his flight ticket. The new Pan American Chief set up a Pan American Team to assist him in the management. It was constituted by Alex (USA), Mártires (Dominican Republic) and Tino (Argentina).

On Friday the 23rd we began as always with adoration and lauds, led by Argentina and Chile, then breakfast and then we revised and corrected the Charter of Cordoba. We ended the morning with the evaluation of the 3rd Assembly, taking into account the following topics: organization, methodology, accommodation, content, environment and liturgy. Everything was very well valued, only some expressed that the house was very cold. Then we projected the 4th Pan American Assembly that will be in Brazil at the beginning of September 2026.

In the afternoon we made a nice walk through the city of Cordoba and celebrated the Eucharist in the Major Seminary of Cordoba. We culminated our Assembly with dinner on Friday, as some had their tickets for Friday night. On Saturday there were only some who left that day and others who stayed a few more days in Córdoba.