Hope to see you in Heaven !

(A Tribute to my brother Priest of Jesus Caritas)

Sudden and shocking breaking news was received that Fr. Thomaiar Susai (India) slept in the Lord on Friday 25 July in the hospital in Yangon, Myanmar. He was later taken to Bangalore and buried at Sacred Heart Priests Cemetery on 29 July.

Fr. Thomaiar was one of the 26 Priests from Jesus Caritas Fraternity of Priests who had come together from 6 countries to go through a deep experience of spirituality of Little Bro. Charles (1858-1916) by exercising Month of Nazareth (July 1-23, 2015) in Myanmar. During the last week there was one week Retreat. On the last day of Retreat he had a stroke on 21 July. He was admitted in a hospital nearby city in Mandalay. Later he was shifted in Yangon for better treatment. He was taken good care of by brother Priests. Finally after having received Sacrament of the anointing of Sick by H.E. Archbishop Most Rev. Charles Bo he breathed his last.

First time I met Fr. Thoamiar was in June 1992 during the Month of Nazareth at Baguio City (Philippines) organized by Jesus Caritas Fraternity of Priests in Asia. We took active part in all exercises and seeking the deep treasures of Spirituality of Nazareth. We prayed , praised and played together, did manual work went for exposure. We grow into brotherhood. . He always enjoyed and commented on my sharing and reflections. We always admired , supported and strengthen each other.

My brotherhood with Thomaiar in Jesus Caritas Fraternity of Priests has been framed between two Months of Nazareth. And now our last meeting was also in the Month of Nazareth in July 2015 in Myanmar. We spent time together recalling our memories of JC General Assembly 1994 at Cebu City, Philippines. We remembered our senior brothers and friends some of whom have passed from this world and gone to the Lord. And we prayed for them

During this Month of Nazareth we celebrated his Birthday on 11 July 2015. He completed his 64 years of his life. We sang and swished him many happy returns of the day !! He was also main celebrant for Holy Mass on Feast of St. Thomas, his name’s Saint. Few weeks before he came to Myanmar for the Month of Nazareth he celebrated his 37 years of priestly ministry on 5th. June. He has pastorally served in 10 Parishes. He was recently ministry as Parish Priest of Holy Family Church in Ramamurthy Nagar in the Diocese of Bangalore, India. Who knew that after these celebrations and going to Myanmar his Parishners will no longer see their Parish Priest celebrating his priesthood among them.

Thomaiar was a simple person. He lived a simple life style. He was man of few words. He was an active and reflective listener. A deep silence on his face could be observed most of the time.
A day before the first Desert Day he gave some reflections on the spiritual dimension of Desert and prepared us to go through this important spiritual exercise. We reflected on the value of silence and solitude and prayed the prayer of Abandonment. And it was in this spirit of Prayer of abandonment that he must have quietly surrendered his life to the Lord.

His death during Month of Nazareth and at the end of one Week retreat was proved to be an intensive spiritual preparation for Christian and priestly death. After having reflected deeply on the spirit of listening to God in silence and solitude he entered into his communion with the Lord. Yes indeed Our souls are restless until they find rest in you O God.

He spent the last days his life in Myanmar among his brother Priests. My heartfelt thanks go to our brother priests of Myanmar and Archbishop and Cardinal of the Archdiocese of Yangoon. During his last days before his death He was taken good care of both bodily and spiritually.

My condolence for the family of Fr. Thomaiar. I express our solidarity with Most Rev. Dr. Bernard Moras, Archbishop of Bangalore, Religious and Clergy of the Archdiocese of Bangalore and with the Priests of JC Fraternity in India and also the participants of Month of Nazareth in Myanmar.

I had to leave Month of Nazareth half way and had to come back. When we were bidding farewell to each other Fr. Thomaiar, with a smile and shine on his face he invited me to come to India. And I promised him that I will see him in Bangalore. I had no opportunity to bid you farewell from this earthly journey dear Thomaiar. I promise you that you will always be remembered. Through our prayers for each other we will bring heaven and earth closer. And I hope to meet you in heaven. There we will celebrate mystery of the Resurrection and Eucharist in its fullest sense. 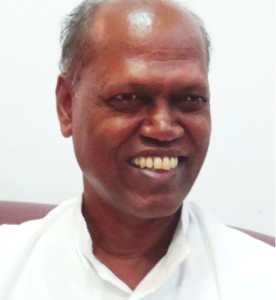 From Myanmar to the Father’s House

It was indeed very hard to understand and accept what has happened to our Brother. At that moment the Prayer of Abandonment became very personal and real which we were reciting together number of times in a day.

We look back with gratitude, as we remember the passing away to eternal life of our beloved Jesus Cartitas Fraternity member Fr. Thomaiar Susai who died on Friday, July 24, 2015 at 8:43 pm in Yangon, Myanmar while the Asian Month of Nazareth 2015 was reaching its conclusion.

Fr. Thomaiar was a committed member of Jesus Caritas Fraternity of Priests and showed special zeal and enthusiasm for such spirituality. According to his priest friends who were also part of the Asian Month of Nazareth in Myanmar, he did not have any major health problem, except that he had some heart related health issues a few years back.

In a way, he was well prepared to meet his Creator. His Feast Day – St. Thomas the Apostle and his Birthday were celebrated with great delight. He was the Main Celebrant for both the occasions. He took part in all the spiritual activities of the Month of Nazareth like: Adoration, Gospel Sharing, Celebration of the Holy Mass, Desert Days, Dish washing and other community exercises.

Through the tireless efforts of the Hierarchy and Fraternity members of Myanmar, the mortal remains of Fr. Thomaiar were sent to India from Myanmar on July 28, 2015. They were taken straight from the Airport to the Holy Family Church – Ramamurthy Nagar, where he was the Parish Priest.

Fr. Thomaiar was born on July 11, 1951 at Muthuvijayapuram, Ramanathapuram Dist., Tamil Nadu. Out of 6 children (4 boys and 2 girls), Fr. Thomaiar was the fifth child. His parents and eldest brother have already gone to their eternal reward.

After his high school studies in his home town, he joined the Archdiocese of Bangalore to have his priestly formation at St. Mary’s Minor Seminary and at St. Peter’s Pontifical Seminary, Bangalore. He was ordained a priest on June 5,1978 at Ascension Church, Bangalore, by the late Archbishop Packiam Arokiaswamy.

Let us continue to pray for the repose of his soul in gratitude to God for all the services that he has rendered to the Fraternity and to the people of God in his Archdiocese.

On behalf of all the Asian and International Fraternity Members, I express my heartfelt sympathies to the Archbishop and Fraternity of priests of the Archdiocese of Bangalore, to the brothers and sisters, relatives and friends of Fr. Thomaiar. May the Lord grant them the strength and courage to bear this irreparable loss.