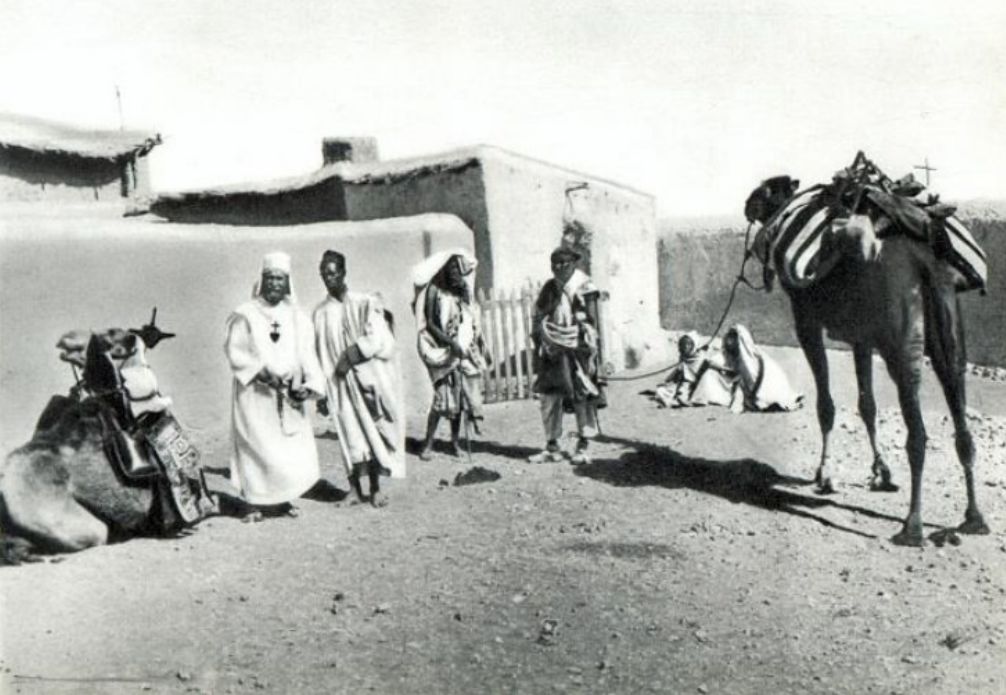 The International Fraternity of Jesus Caritas rejoices in the theme and scope of the recent encyclical of Pope Francis – FRATELLI TUTTI – and by the renewed appeal for universal brotherhood amongst all men and women. And it is encouraging to observe that towards its conclusion the person of Charles de Foucauld stands with Saint Francis of Assisi from whose Admonitions this document draws its inspiration. Blessed Charles, due to be numbered among the saints this month, embodied in every way the aspiration and concrete expression of what universal brotherhood signifies.

286. In these pages of reflection on universal fraternity, I felt inspired particularly by Saint Francis of Assisi. Yet I would like to conclude by mentioning another person of deep faith who, drawing upon his intense experience of God, made a journey of transformation towards feeling a brother to all. I am speaking of Blessed Charles de Foucauld.

287. Blessed Charles directed his ideal of total surrender to God towards an identification with the poor, abandoned in the depths of the African desert. In that setting, he expressed his desire to feel himself a brother to every human being and asked a friend to ‘pray to God that I truly be the brother of all’. He wanted to be, in the end, ‘the universal brother’. Yet only by identifying with the least did he come at last to be the brother of all. May God inspire the dream in all of us. Amen.

Charles de Foucauld’s dream followed the same route as that of Francis of Assisi. Like Francis he underwent radical conversion. He was poor and, like Francis, he wanted neither works nor buildings but witness. Like Francis, he lived in an age replete with problems for the church and for the world. One can often wonder about the reason for this natural similarity between the Saharan mystic and the saint of Assisi. This encyclical sharpens focus: both of them lived in an age which suffered from the same social and religious contradictions but also the same pressure for an authentic return to the gospel: both of them recognised that in frenetic activity there was an inevitable fragmentation that affects all. They condensed the complexities of their search and the contradictions of their wounded world into two incisive ideals – the notion of poverty and that of universal brotherhood. They were both committed to the culture of encounter – listening to the other at a new depth so that one’s own way of living may be challenged and made new. They promoted dialogue and solidarity as the effective way to respect the common good.

We note that this encyclical is subtitled ‘ On Fraternity and Social Friendship’ and has been written by Pope Francis with a stated purpose:

It does not claim to offer a complete teaching on fraternal love, but rather to consider its universal scope, its openness to every man and woman. I offer this social encyclical as a modest contribution to continued reflection, in the hope that in the face of present day attempts to eliminate or ignore others, we may prove capable of responding with a new vision of fraternity and social friendship that will not remain at the level of words. Although I have written it from the Christian convictions that inspire and sustain me, I have sought to make this reflection an invitation to dialogue among all people of good will (FT, 6).

This encyclical will be globally appreciated because the Pope recognises that the human conscience is in crisis and distanced from transcendent values and we are all experiencing the numbness that the void of interconnectedness exposes. When the last Israeli president Shimon Peres visited Pope Francis six years ago to promote the idea of a Parliament of World Religions, the Pope took time to reflect and discern since there is a risk that we ‘secularize’ transcendence and treat it as a political tool. Pope Francis wishes to make the idea of fraternity a fundamental notion and leans on the witness of Saint Francis and Brother Charles as exemplars of this ideal. They are the mentors of his dream for all of humankind.

As we travel with Brother Charles through his eventful life we see the continuum of this fraternal ideal take root and develop: as a wayward and questioning youth, as Moroccan explorer, as a novice at Notre Dame des Neiges, as a Trappist at Akbes, as a servant at the Poor Clare’s in Nazareth, at Jerusalem, as a hermit at Beni-Abbes and in the Hoggar. In the life and writings of this universal brother we discover one of the great spiritual figures of the twentieth century. Born in 1859 into an aristocratic family, after a radical conversion experience in the prime of his life, de Foucauld retreated from France to the Sahara, where he lived among the local Muslim Tuaregs. He was assassinated in 1916. This conversion moment is crucial in the central call of FRATELLI TUTTI. The encyclical is written in an invitational style. The invitation is, however, unremitting and is focused on nothing less than a personal conversion of heart; a direct and individual call by Pope Francis to universal metanoia in the light of his astute assessment of the fragility and polarization of today’s world. The choice of Charles de Foucauld as the one who exemplifies a unique response to this invitation to universal fraternity, marks him as a person of significance to our modern world and his witness deserves further study to shape the realization of the dream that FRATELLI TUTTI proposes. The Jesus Caritas Fraternity is a unique meeting place for us all to engage in the study and implementation of this challenging but encouraging encyclical. The dream can be the reality.

Niall Ahern is an Irish diocesan priest and National Responsable of the Jesus Caritas.