The long-awaited announcement, from Vatican News:

“Pope Francis will canonize Blessed Charles De Foucauld, considered to be one of the pioneers of interreligious dialogue, together with six other Blesseds, during a Canonization Mass in St. Peter’s Basilica on 15th May. “The announcement was made on Tuesday 9th November by the Congregation for the Causes of Saints. It follows the Ordinary Public Consistory of 3
May 2021, whereby the Pope had authorized the canonizations, without however setting a date for the ceremony due to the health emergency caused by the Covid-19 pandemic.”

Dearest brothers, I am most grateful for the enriching variety of material submitted for this edition of “Be Brothers uk & eire” (the second under that newly-internationalised title) but it has meant a few contributions have had to be left over for a future issue.

I particularly welcome Peter Coxe’s description of our “Month of Nazareth” in September, all Moira Potier’s assistance and, of course, the material from Ireland. However, DO keep it coming; and, as always, I appeal for local news– what you usually or unusually do in your own fraternity. Do take Michael Jones’ wonderful piece on page 14 as your inspiration!

As we finally approach the year of Brother Charles’ canonisation (yes, perhaps not what he sought, but one of those necessary things ‘pour encourager les autres?!) let us keep in our prayers the need for each of us and our whole poor world to heed his example of universal fraternity, and of learning from those who are different to us. Perhaps it will even enable us, by the grace of God, to navigate a way through the perils of global warming. God bless, Bob.

Read the issue on PDF: Be BrothersA4Nov2021

I am ready for all,
I accept all you ask.

Let your will be done in me
I wish no more than this.

Into your loving hands I commend all my life
Give to you with all my heart
I love you, only Lord,

So I need to give my own self without reserve
Give with boundless confidence
For you are Oh God my all.

Among the various contributions that emerged on the figure of Charles de Foucauld, awaiting his canonization, it is worth highlighting the text My God as you are good, ed. Vatican, by Andrea Mandonico. 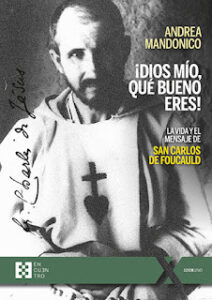 The challenge of Mandonico’s text was not simple. For those who know the figure of Charles de Foucauld, they know well that his life would require libraries, for the sole fact that it synthesizes various existential choices and numerous vocations.

The text is therefore the subject of a considerable effort, but at the same time brilliant for harmony, scriptural lightness and overview in the treatment.
The book is accompanied by the chronology of the saint, very useful for contextualizing the various chapters and an excellent, as well as very elegant, preface by Mons. Ennio Apeciti.

After a first overview, through the introduction, Mandonico’s writing broadens the field through an intelligent historical contextualization on the time lived by Charles de Foucauld. Within the historical overview. Mandonico applies an overview of the ecclesial context, highlighting strengths and weaknesses. He pauses briefly on the social and political context, with fundamental details for understanding the biography of the blessed. After having contextualized the historical period and the current ecclesiology, he moves on to the profile of Charles de Foucauld by going through family details, his birth, his adolescence, his life as a soldier and later as an explorer. This is how he goes on to present his conversion, his meetings in Paris and the radicalism that will characterize the new Charles, a believer and “sick” of Jesus. Starting from the conversion, Mandonico briefly presents the various lives of the new convert: first Pellegrino in Holy Land, later a Trappist monk. We thus come to present the life of Charles in Nazareth, hired by the Poor Clares as a servant. It is in this context that Charles’s new vocation is highlighted, the priestly one, illuminated by the conversation he had with Mére Elisabeth du Calvaire, abbess of the convent of Jerusalem, a woman who will help him to dispel his doubts about accessing sacred orders. After this part of his life, the new ministry of Charles de Foucauld is presented in Beni-Abbès and Tamanrasset.

This is how we arrive at one of the fundamental pillars which is also the true heart of Foucauldian spirituality: Nazareth. Mandonico analyzes how the great newness of the Spirit, brought about through the spirituality of Charles de Foucauld, starts from the hiding of the Son of God and his thirty years of hidden life in Nazareth which, loved after his first pilgrimage to the holy land, will become the architectural principle on which the life of the Universal Brother is built and, subsequently, the cornerstone on which to build the spiritualities that will refer to Blessed Charles.

After the great novelty of Nazareth, as the cornerstone of the spirituality of Charles de Foucauld, Mandonico tightens the field on the two great pillars that hold Foucauldian spiritual architecture: the Word of God and the Eucharist. We know the importance of the Eucharistic cult that had the historical context from which Charles de Foucauld drew, especially for the practices of piety, such as devotion to the Sacred Heart and the redemptive sacrificial offering. What is striking, alongside this element which can also be found in other figures, is the love for the Word of God and the time he gives for the “lectio divina”, with the lover’s methodology. Mandonico carefully highlights the prophecy and the great creative novelty in the interiority of the missionary monk, in a life that is surprised in the Spirit amidst contemplative gasps and missionary announcements.

A further chapter is dedicated to the Mystery of the Visitation, the hermeneutic criterion of all human relations of Charles. He manages to go beyond his own colonial prejudices, as a priest, imagining himself as a living tabernacle that brings Jesus to others, as Mary does with Saint Elizabeth, causing little John to startle in a dance of joy in the womb for the presence of the Son of God. It is precisely the Mystery of the Visitation that will be declined in Beni-Abbès and in Tamanrasset differently, according to how circumstances required. The author continues to carefully analyze themes dear to Charles de Foucauld such as love in contemplation and the fruitfulness of the apostolate, preaching the Gospel with life, the universal fatherhood of God, the desire for universal brotherhood, the longing for supreme testimony of martyrdom and, in the last chapter, an eschatological reflection on going to meet the Bridegroom who is coming.

The text ends with two very interesting appendices; in the first there are analogies on Pope Francis and his Magisterium in the footsteps of Blessed Charles de Foucauld while, in the second, the writings of Blessed Charles himself. At the end of the text there is the bibliography cited in the text of the works and correspondence of Charles de Foucauld.

Reading this text is highly recommended because, in a careful and timely manner, it helps to understand the greatness and novelty of a new way of living and thinking about holiness today, contemplative in activity, ecumenical and interreligious in our globalized world. The text is a phrasing that makes the life and texts of the blessed speak, within the great symphony of the Magisterium, orchestrated by the Spirit, having as its score the Gospel and as irreplaceable scenography the face and life of the Unique Model, the Beloved Lord Jesus .

Reading this book, I am sure, will bring great human and spiritual benefit to everyone.

Read on PDF: Andrea MANDONICO. MY GOD, HOW GOOD YOU ARE. Salvatore SCIANNAMEA eng