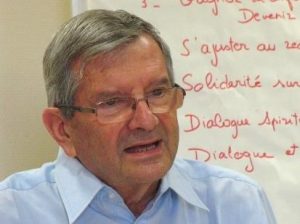 The notion of interreligious dialogue as we understand it today in the Church was totally foreign to him. While having been, I believe, a forerunner of the Council’s openness to the universal dimension of the mission of the Church, the process of dialogue between Christian believers and Muslims as such did not fall into its categories. He lived with the theology of his time in the fear of joining Muslims in order to save “these ignorant souls” by bringing them to know Christ.

In addition, he carried out his ministry in a specific socio-political context. France, in those days, extended its colonial empire over a part of Africa. At that time many believed that she was doing civilizing work and that she could provide the education necessary to free the colonized peoples from poverty and ignorance. Brother Charles adhered to this aim. He therefore did not see in the Islam of his time a religion with its own consistency, its history, its diverse streams with some of which Christians could enter into dialogue.

Although Islam had exerted on him, at a certain moment of his life, a certain fascination and though the meeting with the Moslems constituted for him a significant stage on the road of his conversion, he would have been far from subscribing to this conciliar vision of Islam according to which “The Church regards with esteem also the Muslims. They adore the One God, living and subsisting in Himself; merciful and all-powerful, the creator of heaven and earth, who has spoken to men…” (Nostra Aetate No. 3). He was therefore not situated in the theological problematic of the Second Vatican Council, which recognizes in non-Christian religions the presence of “seeds of the Word” which can constitute a basis for entering into dialogue with believers of another religion.

However, it seems to me that we can nevertheless consider Brother Charles as a precursor of dialogue. Because he instituted with the Muslim populations that he met, in particular with the Tuaregs, a “dialogue of life” which was later presented by the encyclical “Ecclesiam Suam” of Pope Paul VI in 1964 as the fundamental basis of any dialogue: “We cannot save the world from outside; like the Word of God who became man, we must assimilate, to a certain extent, the forms of life of those to whom we want to bring the message of Christ …. We must share common customs, provided they are human and honest, especially those of the little ones, if we want to be heard and understood. Before even speaking, it is necessary to listen to the voice and even more so to the heart of man … We must make ourselves the brothers of men … The climate for dialogue is friendship “N ° 87.

Thus, Brother Charles, by devoting all his energy and a large part of his time to learning the language of the Tuaregs whose life he shared, by developing very simple conversations on the realities of their daily life, by opening up himself to their poetry and thus by trying to understand the genius of this people, was able to open, by the dialogue with its hosts, a climate of confidence to the point where he became for many “a friend”. He thus showed that the mission of the Church is also to make up brothers, while respecting differences of culture or religion, as the Church subsequently did in many countries of the planet, based on the openings of the Second Vatican Council.
We can therefore recognize, for the priests of the Jesus Caritas priestly fraternity that we are, that Brother Charles opened to us a spirituality of dialogue which can still inspire us in the encounters we live not only with Muslims but also with all those who do not share our faith. Thus the path of dialogue he opened with the Tuaregs unfolded in several fundamental figures:
He was able to accept being disorientated in order to immerse himself in the other’s country. He carried out this movement that Pope Francis calls “a Church going out”. He wanted to be welcomed by these people and become as much as possible “one of them”. And he made the learning of their language a mystical work because it was for him in the line of the incarnation of Christ in this humanity whom he came to save.

By presenting himself as “a pioneer”, he showed us that the dialogue of life is an integral part of the mission of the Church.