Sorry, this entry is only available in German.

“I shall see the Lord no more in the land of the living. No longer shall I behold my fellow men among those who dwell in the world. My dwelling, like a shepherd’s tent, is struck down and borne away from me; you have folded up my life, like a weaver who severs the last thread…” (Isaiah 38: 11-12).

“There is such a thing as a good death. We are responsible for the way we die. We have to choose between clinging to life in such a way that death becomes nothing but a failure, or letting go of life in freedom so that we can be given to others as a source of hope.” (Henri Nouwen, Life of the Beloved).

feeling deeply both gratitude for the gift and sadness for the loss, I announce to you the passing of our big brother, dear friend and a living icon in the fraternity, MARIANO PUGA CONCHA from Santiago, Chile. He passed away last 14 March 2020 at 88 years old. He died of lymphatic cancer.

Allow me to honor the soul brotherhood we had with Mariano with the following lines. My first encounter with Mariano was in Cairo General Assembly in 2000. Prior to his election as general responsible, his presence in the assembly was like a virus contaminating us with joy and laughter with his delightful singing accompanied by an accordion. Little did I know that these songs were from the slums of Santiago, very jovial and empowering and never depressing. He was like a troubadour singing with his lungs and heart the dreams and aspirations of his people in Santiago. His wild spirit and joy-filled music captivated me.

My second encounter was in the US in 2002. He was visiting US fraternity while I was in a sabbatical. The late Howard Caulkins, another dear friend proposed that if I would come with him to the country assembly in Minnesota then, he would drive me to Mepkin Abbey

where I would spend my sabbath year as monastic guest. We did drive together and there, I met Mariano again. Very easily, we reconnected, soul to soul, in a deeply personal and intimate way. I was sharing with him my crisis with the Church, with my personal demons and with God and I never felt so listened to. He simply embraced me tightly like an elder brother comforting a younger brother, with tears in his eyes, feeling my pain. Then, he smiled at me with these soothing words, “It will be okay.” We parted ways with a promise to hold each other in prayer – I to the Abbey and him to Tammanraset. My more recent encounter with him was last year in Cebu during the General Assembly. At 88, travelling across the globe took a heavy toll on him. He was hospitalized twice, and in both times, I was with him. The sage in him was calling me to come out from the tomb of my pretense and share personal testimonies. We easily reconnected, brother to brother, valuing each of our stories, at the emergency room (where he stayed for 5 hours) then, inside his room (which he vehemently resisted for he wanted to stay at the ward with the poor people), until very late in the evening. Then, with a smile on his face, he whispered to me, “the assembly has just finished, I could now go home.” I went home that night, so humbled yet so enriched by this soul-full exchange, our review of life which for Mariano is at the heart of any assembly of brothers.

Allow me to share also some lines which Fernando Tapia wrote to me about Mariano. “Mariano was a passionate seeker of God and a lover of Jesus of Nazareth. The encounter 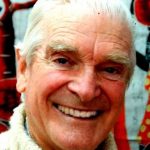 with Him through the poor of a dump changed his life forever. He left everything and entered the seminary. Here he met Charles de Foucauld and followed his spirituality until the end of his life. He was a spiritual father and formator at the seminary of Santiago. Then he became a worker priest for more than 30 years of his life sharing in the lives of the poor. He always lived among them. He was their pastor, defender during the time of military dictatorship of Pinochet, suffered being imprisoned 7 times. He promoted a church committed to the poor. He preached many retreats in Chile and outside of Chile. He was a man of prayer, of joy, close to everyone, a friend of believers and non-believers, a missionary to the peripheries of the Chilean society, following in the footsteps of Bro Charles. The gospel was his guide which he wanted to cry with his own life.”

Mariano, brother, friend, thank you very much. Thank you for you wild witness of a wild God in Jesus of Nazareth. I share the gratitude and the grief of the poor people of Santiago 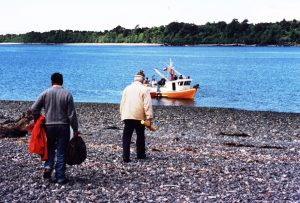 whom you have touched by your witness. May Jesus, the Good Shepherd welcome you to your new abode for eternity which he prepared for those who are faithful.

Brothers, I pray with Mariano that in our meetings and assemblies, we continue to risk sharing our poverty and vulnerability to one another. It is our poverty that unites, qualifies and liberates us as brothers-in-fraternity. The same is our springboard for mission with the poor, as we said in Cebu. May it also be our humble yet firm resolve to share in the missionary life of Jesus of Nazareth with the poor in the footsteps of Bro Charles.

With my fraternal embrace,
Eric LOZADA

Mariano is staying… because when a person like him dies, he stays definitively among us, in our hearts and in our history. Mariano, like all of us has many flaws, but his virtues are so rare, that they eclipse by far everything we might not like about him; the strength of his honest and consistent austerity stands out, as well as the humility of his kind manner, especially attentive to the poorest and most suffering. And we appreciate that his intelligence is not ironic… and that he can sing well and play the accordion.

I remember that one night my namesake, Fr. Roberto Mosher, going down Los Baqueanos street in Peñalolén, with the lights of Santiago at our feet and surrounded by the voices of the neighborhood said to me: “I do not know if we take care of the people or if it is they who take care of us.” And I believe that Mariano Puga has been a priest cared for by the people. The people have recognized in this outsider by birth a profound man truly in love with the way of the poor. The people have accompanied him in every neighborhood where he has been, and he has closely accompanied the lives and ways of all those he has seen in his life, regardless of whether they believe or not. His broad and generous heart has a very good memory. I heard speak of Mariano Puga in 1979 and met him in the winter of ’86, when Rufino invited me to afternoon tea in La Penélope, the hut where Mariano lived in the Digna Rosa quarter. Juan Barraza, The Ticho and two or three more were staying there at that time. They were the hard times of the dictatorship and they spoke of the repression in the area. Mariano was leading the Sebastián Acevedo Anti-Torture Movement, of which my grandmother Josefina was a member. I was impressed by Mariano. Because of the poverty of his style and the news my grandmother told me about him in the street actions; when, for example, he stood in front of a policeman and pointing to his truncheon, said, “you have come here to punish the people, hit me then, here I am, hit me”. My grandmother told me the policeman turned round and ran away.

I am the son of an outsider who became a Marxist and joined the Mir, and I know that falling in love with the way of the poor and giving one’s all to defend them against the unjust aggression of “Mr. Money”, is neither easy nor cost free. But for Mariano the ideal was not a social dynamic but a person: Jesus of Nazareth and his Gospel, when he tells us that God (God Himself!… the Creator of Creation!) was for the poor. It must be said that in the ’60s and ’70s there were many priests and nuns who clearly opted for the poor and became associates in friendship (Bishop Enrique Alvear, Alfonso Baeza, Bishop Fernando Ariztía, Roberto Bolton, Pablo Richard, Blanca Rengifo, Ronaldo Muñoz, Meche and Elena Chaín, Esteban Gumucio, Karoline Meyer, Pepe Aldunate, Anita Gossens, Ignacio Vergara…), Mariano was never a loner. Mariano was very motivated to follow Jesus in the style of the Frenchman Charles de Foucauld, a Viscount who became poor and “brother to all” in following Jesus. Puga became a worker with a team of painter decorators, working each morning until lunch to attend the communities in the afternoons. Once, going to my mom’s house on Lastarria Street I heard: “Robeeeertoooo…!!!” it was Mariano up above the scaffolding, with his paper cone and full of paint that gestured to greet me. Ever attentive to his surroundings. At this moment he is dying in La Minga, his home in Villa Francia, always surrounded by friends.

About the year ’90 or ’91 someone said: “Mariano Puga is present in the consciousness of all the priests of Chile”, and I believe that it is true and that irritates almost all the monsignors and many priests who serve with schedules and ‘respectable conditions’. And this cost him. Mariano sometimes told me about Nestor Paz Zamora and gave me his blog. Néstor Paz was a former Bolivian seminarist (brother of Jaime who was president of Bolivia), who joined the guerrillas leaving after his death a message of love and struggle for a better world. Mariano constantly yearns to be radical. He visited me in 2013 in Africa, months after Pierre Dubois’s funeral, following an interview in The Clinic he titled “The Bishops simply don’t get It.” This brought him problems with those alluded to (although it is now clear – and endorsed by the Pope – that the priest was absolutely right) and Mariano was downhearted. He doesn’t like to be anyone’s enemy. Although not betraying Gospel values, he is friendly even with those who think diametrically opposed to him. He was a cadet in the time of Lieutenant Augusto Pinochet at the Military School, but I doubt he would have given him communion at a Mass after the coup of ’73. He was imprisoned in Villa Grimaldi and told us that an agent of the Dina (Secret Police) approached him asking, “Father, how can I get my son baptized?” Years later Mariano presided over the Liturgy with which the Park for Peace was opened in the same place as the horrific Terranova barracks from where so many people disappeared. In this beloved priest any of us can find a welcome, especially in the troubles they suffer. That is why Mariano will be long in the memory of this Chile which vociferously needs to soothe so many wounds that greed leaves every day in the poor quarters and which violently plucks eyes out trying vainly to hide its sin.
Roberto Guzmán 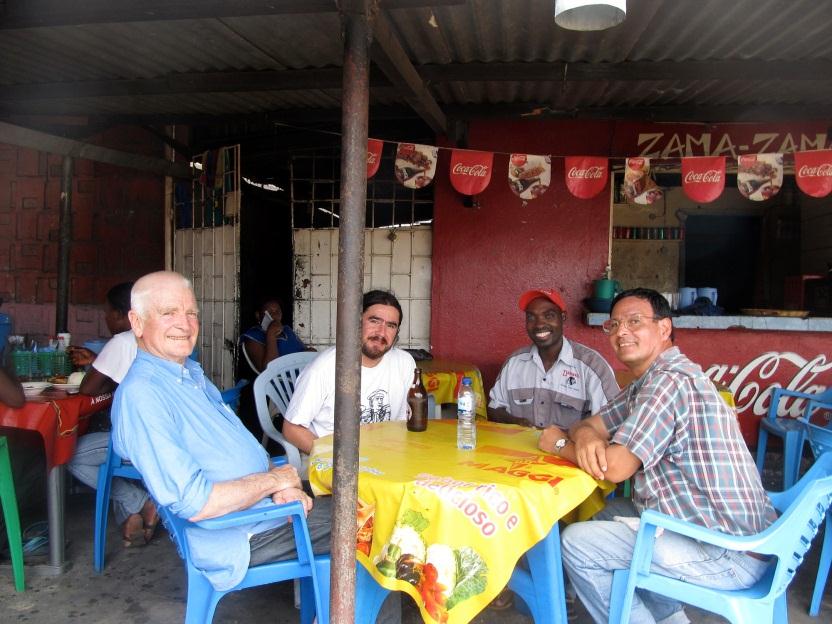