we send you our fraternal greeting from Bangalore, India! And we want to share with you the work that we have done. It is our first meeting since Felix, our dear brother, has died, and we celebrate his memory. Indeed, he has helped us from heaven. We are happy to have achieved the goal of this meeting even through the various difficulties we have 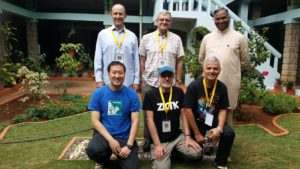 encountered. Emmanuel and Honoré have not been able to be with us because they could not obtain their visa for India. We have had lots of communication with both of them these days. Also, Arthur Charles, Asian Continental Responsible, has not been able to obtain his visa. Prakesh from India and Philip from Korea, members of the Asian Council, have accompanied us. All our work has been to prepare for the General Assembly of 2019, which was going to be in Bangalore, India; as it turns out it will be in the Philippines because of the problems many brothers have encountered in obtaining their visa. 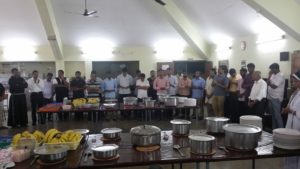 The brothers of Bangalore have cared for us in every moment of our stay which began at Shanti Sadahna Trust, a Franciscan Center for Spirituality run by the Capuchins and concluded at the Jesuit House, Ashirvad. Our brother Alphonse, Regional Responsible for India, has been a guardian angel for the International Team, constantly preoccupied for our transportation, contacts, needs and arrangements. Thanks, Alphonse, for everything and thanks to the brothers of India.

In our daily work to prepare for the assembly we have appreciated the realities of all the continents– how the fraternities are doing, the continental assemblies, the Month of Nazareth–the joys and problems of so many brothers throughout the world. Mark has presented a financial report and has made a budget for the 2019 Assembly. We will send this to all the responsibles. We hope all regions will help with the assembly so that we can offer assistance to brothers all over the world with their trip to the Philippines.

We have completed the schedule for the Assembly, hour by hour and day by day including the methodology and responsible persons for each moment. It has not been difficult work because we have worked as a team with clear objectives for the assembly, whose them is to Deepen and update the missionary identity of the diocesan priest in the light of the testimony of Br. Charles de FOUCAULD, contemplative and bearer of the Good News of Jesus. 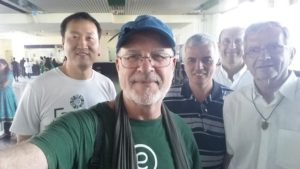 The Questionnaire for Bangalore, given out more than a year ago, has not had many responses; many countries have not responded and we think it will be the work of the continental responsibles to motivate all the brothers in this preparation. For this reason, in March, we will again send out the questionnaire so that we can work with the responses in continental groups in the Philippines. Thus it will be the fruit of many responses and not just the thoughts of a few.

We are motivated even more strongly that the message of universal fraternity of Brother Charles is a guide for us on our way given the great social and ecclesial differences in various continents. The great challenges presented by fundamentalists both inside and 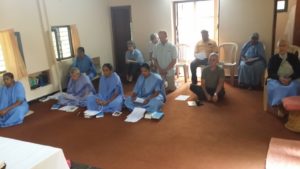 outside the church, the lack of political and inter-religious dialogue, the threats of nuclear war, a deepening poverty in many countries because of government corruption, multinational exploitation with degradation of the planet, the reality of women mistreated in so many ways in so many parts of the world, the ordeal of refugees, all of this won’t allow a person to sleep (or at least it will leave us indifferent!) Charles de FOUCAULD and our Holy Father Francisco are animating us to assume a serious and prophetic posture in this wounded and suffering world. Our Assembly in the Philippines is a collaboration with this call to be a Church which goes out of itself, sent to the peripheries. From there we can deepen the missionary essence of our ministry which gives preferential treatment to the culture of hope. 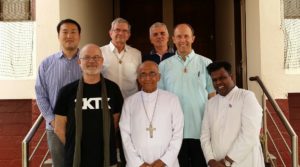 We have spent time with the family of Charles de FOUCAULD, sharing moments of prayer and encounter with the Little Sisters, with the secular fraternity, with a Little Brother of Jesus and another Brother of the Gospel. We have felt like a family of men and women who share a common journey. We visited the Archbishop of Bangalore, Bernard MORAS learning more closely the problems of the diocese as also we have done with the clergy of some parishes. Our meeting with the priestly fraternities of Bangalore at Joseph’s parish was important for us as we celebrated Eucharist and shared dialogue following dinner.

As an International Team we have practiced fraternity in prayer, adoration and Eucharist. Mark has coordinated this liturgical aspect. For us, sharing the work of preparing for the assembly, which has taken most of our time, is a sign of fraternity: being ready to listen to one another, to assist and support one another, and we have done this with joy as a service to all our brothers. Bangalore’s six million people, its noise, its pollution and impressive traffic all make us 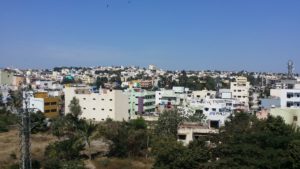 appreciate even more Alphonse’s work with a million details. All this has caused us to go out of our comfort zone; it has been our Nazareth.

We want to share with you that, after a two year process, the new fraternity in Haiti has been accepted as a Priestly Fraternity. Welcome Jonas and brothers from Haiti! Also we are in contact with priests from Venezuela about the possibility of forming a fraternity in Venezuela.

With much joy and hope we, the International Team, will work to make this preparation for the General Assembly a shared work for the good of all in the fraternity, the church, and for those with whom we live. It is our mission to announce and encounter Jesus in the style of Nazareth, contemplative and missionary.

From this time on, all brothers need to commit themselves to this work, our older or infirm brothers with their prayer and the more active with their contributions. Thanks! Let us remember that all learn from all and no one is a master of the other… We have only one teacher, who is Jesus. 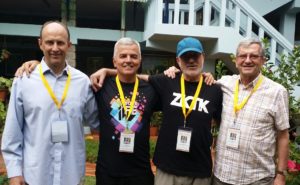 Finally a fraternal embrace from 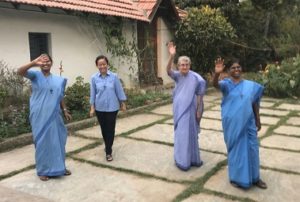 The second mystery of the life of Christ that marked deeply the spirituality of Brother Charles was Nazareth. It is a coherent way of life with the mystery of the incarnation among the poor: “Jesus went to Nazareth, the place of the hidden life, of the common life, of the life of family, of prayer, work, darkness, silent virtues, practiced having as witnesses God, his friends and neighbors. Nazareth is the place where the life of the majority of the people passes. We have to respect infinitely the smallest of our brothers…And mix with them. Let us be one of them in the measure that God wants…And treat them fraternally so as to have in the end the honor and the joy to be accepted as one of them”

Charles of Foucauld was a passionate searcher for God after his conversion at 28 years of age. At around 15 years of age he had lost the faith and had a very disorderly youth. He was expelled from the Jesuit school for bad behavior, later was expelled from the Army for not respecting the military rules. He wasted his money on wine, women and parties, studied little and wandered without a goal in life. This lifestyle left him a deep emptiness. He says it in a meditation several years later remembering this stage of his life: “The bad that I did, I did not approve it, nor wanted it. It was a sadness that I have not experienced more than then. It returned every night when I was in my accommodation. I was dumb and overwhelmed during these so-called parties; I organized them, but, when the moment arrived I spend them in complete silence, loathing and disgust”